How Did Companies Supply This Major Volume of Cars?

CEO of two major Iranian automakers announced that they will pre-sale 90 thousand cars last week, which shocked everyone. As they said before, they were dealing with the lack of auto parts and defective vehicle. Now if they were able to produce cars, why did not they presented these cars to the market sooner, and waited for their car prices to be doubled? 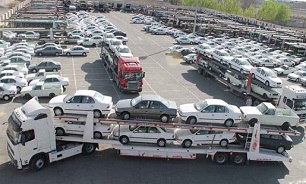 Khodrocar – Four days ago, CEO of two major automakers in Iran said that there is nothing such as hoarding and they will pre-sale 90 thousand cars soon.
Iran Khodro and Saipa Group announced that they would pre-sale 40 thousand and 50 thousand cars, in order to organize the market. Two days ago, Saipa group started to it pre-sale and sold all 50 thousand cars just in two days. Next week it is the turn of Iran Khodro.

Market’s Reset by Supplying 90 Thousand Cars
But the main question in the pre-sale plans is that if these two companies were able to produce this number of cars, why did not they prevent price increases? Also, if they were able to supply their auto parts, why did they say that 70 thousand vehicles suffer from the lack of auto parts? Did a miracle happen?
Farbod Zaveh, an automotive industry expert, tells Khodrocar regarding th pre-sales: "This plan has some ambiguities. If these two companies were suffering from the lack of auto parts, how did they manage to deal with it? Also, if these parts were available, then why did not these cars released sooner? Why they are releasing this number of cars after this turbulent situation in car market? And why are they selling their cars lower than their real prices?”

"Deputy of Industrial Development must be responsible for that and make it crystal clear that how these companies supplied the parts of 90 thousand vehicles?” He says.
Zaveh believes that the goal is to organize the market, however nothing happened since the implementation of this plan.
He says: "This seem like a political movement because the market is disturbed and there is no bright future for it, yet.
Khodrocar – There were news around the lack of parts for 70 thousand cars. Now with the pre-sale plans, there are some ambiguities about these vehicles and auto parts’ supply. Do these two companies have the permission to clear their parts from the customs while Iran is in sanction? The authorities must clarify it soon.