Human resources lay-off began in the spring and boomed in the summer among auto companies. This demassing has been continued since now because the doors of auto importation still closed and importers don’t have another way instead of worker lay-off. 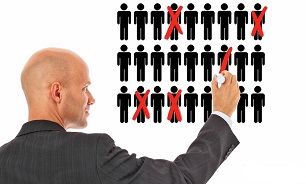 Khodrocar – The whispers of workers lay-off among all auto companies like importers, part manufacturers, leasing companies and spare part manufacturers has been heard since the beginning of the spring and increased during the summer till now. From 14 thousand employees in this sector near 3 thousand of them became unemployed and 3 thousand more people may join them in the near future.
The question is till the next deadline of sanctions in 29 days will the lay-off continues because there is no car to sell and after sale services will decrease or the government will find a way to stop it?
When did the worker lay-off start?
As the exchange rate increased, America exits the JCPOA and worries about the SABTARESH, importers started to decrease their human resources but after the June 23rd the minister of Industry, Mine and Trade closed the importation in auto sector. Since that day most of importing companies decreased their work force then some European companies exit Iran and all together everything got worst for Iranian importation companies. We can surely say that most of companies even the biggest of them are decreased their work force or closed their company entirely.
Statistics of workers lay-off
Statistics from the beginning of the year since September show that near 3 thousand people became unemployed. According to the secretary of auto importers association, if the importation remain ban till the end of the year this statistic will reach 6 thousand people. Beside all problems of the automotive industry such as ban of importation, none clearance of 20 thousand cars in the customs how the auto industry will take the pressure of 6 thousand unemployment in the near future? Should Iran generally say goodbye to car imports?
Now after 2 months from the first part of USA’s sanctions we are reaching the second part in the next month and will the auto industry have proper time to solve the unemployment problem or this industry should prepare for harder days? Is it at all possible that the domestic automotive industry has the ability to compensate for the damage caused by the lack of importers and the entry of foreign cars and their competition with domestic vehicles; should it continue to produce exclusivity?
Khodrocar Reporter: Negar Mir Karimi
Khodrocar Translator: Amin Zamani
Tags: Khodrocar
Visit Home Send to friends Print
Share To:
subscribe to newsletter
Your Comment