German manufacturers under investigation for collusion

The Volkswagen Group, Daimler and BMW under pressure following report on antitrust collusion. 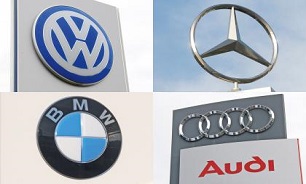 Volkswagen, Daimler and BMW are being investigated by Germany’s Federal Cartel Office on suspected antitrust collusion over decades on technology relating to exhaust gas measures on diesel vehicles. German newspaper Spiegel cites documents submitted by VW and another by Daimler as part of its report on the situation.

The companies allegedly met to discuss AdBlue tanks, which deliver the urea that purifies diesel emissions in many of the brand's cars. It goes on to say that the companies decided to avoid expensive larger tanks and instead fit smaller ones that aren't able to clean exhaust gases sufficiently.

The report said that collusion was happening since the 1990s and involved over 200 emplyee in 60 working groups.

The allegations will put more pressure on the car industry following the widely reported VW Group dieselgate scandal. VW stocks fell by 4.9 per cent as a reaction to the news, while Daimler and BMW stocks fell to their lowest point since late 2016, according to financial giant Bloomberg.