The Audi R8 Perform Donuts To Confirm It's Going RWD

Heading to the Frankfurt Motor Show next week, the supercar can be briefly seen here dressed in white attire with red accents while performing donuts in a parking lot. 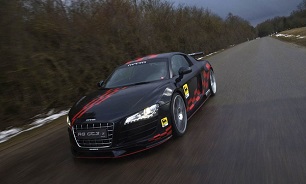 Khodrocar – Hot on the heels of yesterday’s announcement about the imminent arrival of a rear-wheel-drive model from Audi Sport, Ingolstadt’s performance division has published a video to reveal the R8 will be the first model from the brand to lose its Quattro layout.
Heading to the Frankfurt Motor Show next week, the supercar can be briefly seen here dressed in white attire with red accents while performing donuts in a parking lot.
Since we don’t actually get to hear the car, it’s not known at this point whether the new R8 derivative will stick to the naturally aspirated 5.2-liter V10 engine or it will downsize to a turbocharged mill. We can catch a glimpse of the engine bay, but it’s hard to make out any details that would come to suggest it’s the big daddy V10 or something with fewer cylinders and forced induction.
For what it’s worth, it is a known fact Audi is cooking up an entry-level variant with a biturbo 2.9-liter V6 from the RS5, but it’s unclear at this point whether this model will be the one to lose the AWD setup. It could very well happen. In the RS5, it pumps out 450 horsepower and 443 pound-feet (600 Newton-meters) of torque. It’s a brand new engine, which means there is room to extract more power and put it to good use in the new base R8.
On the other hand, seeing as how there's already a similar RWD V10 car out there in the shape of the Lamborghini Huracan LP 580-2, the new R8 model could feature the same engine as its naturally aspirated members of the family.
We won’t have to wait too long to find out as the tail-happy R8 will premiere on Tuesday at the Frankfurt Motor Show where it will sit alongside the RS4 Avant, another premiere from Audi Sport. The crown jewel of the lineup, the all-new A8, will also grace the IAA stage and it will be joined by a pair of autonomous electric concepts.
Watch Audi's official trailer for the RWD R8 HERE.
Source: motor1.com
Tags: announcement ، Frankfurt Motor Show ، supercar ، Audi R8
Visit Home Send to friends Print
Share To:
subscribe to newsletter
Your Comment