the record of automakers debts to part makers broke by the number of 220 thousand billion IRRs and meanwhile shortage of liquidity is one of the main challenges of this industry and keep them away from producing more. 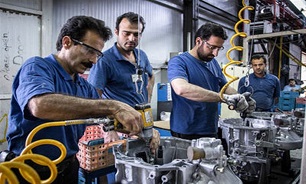 khodrocar - In recent years, the demands of the car makers have been settled in many ways, and this number has always been controlled, but as the automobile industry struggles on the one hand and banks fail to cooperate due to the numerous debts of automakers, these demands are now well beyond Imagined.

Although the industry has provided some solutions to this problem, these proposals have not been implemented so far due to the lack of conditions and the lack of implementation by the banks.

"Since parts makers need liquidity for cash flow as well as the import of parts and raw materials, we are negotiating ways to reduce the volume requirements for automakers." Hamid Reza Samadi, Ddirector of the board of Riseco told khodrocar reporter.

"This problem has been caused by the lack of proper pricing in recent years and now, in addition to the lack of liquidity in the automotive industry, has also led to the segmentation deficit." he added.

"Banks also do not have the necessary credentials for car makers as car debt has increased and car makers' financial balances have been subject to Article 141, which we hope will be a step forward since the government is the major shareholder of the two car makers. Solve the financial problem of automakers and Article 141." he added.

"To this end, credit formats such as the purchase of religion and domestic LCs for automakers have been proposed, even foreign currency conversion has been emphasized, but the acceptance of financial costs by automakers needs to obtain board approval and various negotiations." he said.

"Automobile stocks are a political issue and segment makers try not to get into this format and do not pursue their stock claims. It is also not possible to offer a car in lieu of the many commitments people have from car makers as two car makers currently have around 380,000 commitments so it will take a lot of time to deliver the car to the car maker." he continued.

"The reason for non-payment of liquidity claims and financial problems and liquidity deficits has made the number of car makers' demands more than ever, reaching a number that is not a normal number in the automotive economy and industry." he said.

The comments came as the Association of Homogenous Industries, Motorsports and Manufacturing also suggested solutions to these problems by outlining the acute problems of the automotive supply chain. One of these solutions was to improve the current prices and float the prices of auto parts in the contracts and to change the prices of the automobile parts due to the change in the prices of production inputs in the 10% changeover period without delay.

Referring to the demands of auto makers, the association emphasized that the maximum benefit would be granted by the central bank without the blocking, the freezing of the debt of auto makers and money makers to the banking system for one year and the payment of interest on premature loans until revival. Re-industry, clearing credit and long-term foreign currency purchases was another problem for the makers of the title, and it was emphasized that calculating the exchange rate based on the analysis of sales prices to automakers at the time of opening credit and clearing materials and external debt settlement as a solution. It was suggested to solve this problem. Now, which of the following proposals, presented to the Minister of Industry, Mining and Commerce, can help to unravel the liquidity problems of the fragment industry?
Visit Home Send to friends Print
Share To:
subscribe to newsletter
Your Comment