Clearance of Stocked Cars; from Letter to Practice

The destiny of stocked cars in customs remains unclear and beside all talks of managers of customs about clearing cars, president of vehicle importers association is deny them all. 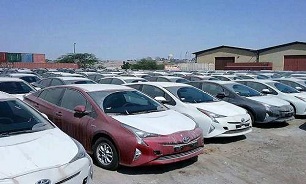 Khodrocar – since the approval of government’s cabinet in last year about clearance of stocked cars in customs no cars have exit the customs and while less than a month remain to the end of the approval but systematic problems are against this approval. Meanwhile supervisor of west customs of the country said all things are ready for clearance of 13400 cars.

The head of the Association of Automobile Importers has also said in response to this claim that everyone claims to have cleared cars in the absence of their dealerships and their withdrawal from the customs, it is enough to publish their list, number, model and VIN number to those who have been at least more than a year Cars have been pre-owned, they can request the delivery of these cars by referring to the vendor and citing information released by claimants for vehicle clearance.

He also said there is no way but honesty to come out of the current state of the country. Truth, legitimacy and transparency and acknowledgment of misplacedness and inconsistency are the first steps to get out of the current situation, while some in the ministries and departments are making a lot of effort and consuming a lot of energy to solve the problem, but as long as some employees friction We are faced with this positive energy and potential potential to remain fruitless and wasteful, and what the ministry and ministries are doing is cotton.

Morshed Solok also talked about the instruction of currency price difference that it will make a price change wave very soon and it will make people who pre ordered their cars 2 years ago more unhappy. Under these circumstances, compliance with obligations will also be difficult for companies. Because if companies are to pay customers money, they will be paid off and consequently the importers will be bankrupt. Of course, this central bank's action is a matter of fact, because the promises and commitments between the two sides have been signed on the basis of the currency of the senate and the provinces. While the Central Bank today states that the basis of the banknote is, and I think it is legally questionable.

The members of the car importers' association believe that the multiplicity of decisions and changes in the government's decisions, as well as the mismanagement of some executive staff and their lack of implementation of the affairs, has led to problems with the clearance of vehicles in the customs. They are demanding that this issue be examined carefully by the accuracy, delicacy and sensitivity of regulatory agencies.
Visit Home Send to friends Print
Share To:
subscribe to newsletter
Your Comment