Parliament's emphasis on the obligation of automakers to scrap cars/ Scrap Yards will be Open Again?

Activity of scrapping yards reduced after vehicle importation banned and even most of scrap yards shut down in last year but there is hope that automakers will rescue scrap yards. 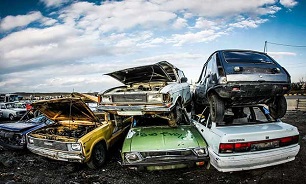 Khodrocar - For more than a year, the cycle of getting rid of worn out vehicles has stopped. According to Mohammad Hussein Goudarzi, chairman of the Association of Motor Vehicles Scrap Yards, due to problems. Lack of laws and lack of obligation for the local producers which is came alongside ban of vehicle importation most of scrap yards shut down. If governments don’t decide to solve problems then all scrap yards will close.

Also, according to statistics published by the Association of Disposal Centers and the Recycling of an Exhausted Vehicle, 70,000 car registrations have been accumulated unused on the sites of these centers, which has left a huge disadvantage for the centers.

This is the year of Production Boost and we hope to see scrap yards are working alongside the production and it is beneficial for the automakers.

"About 6,000 people were operating in 200 car srapping centers, which, unfortunately, stopped the automobile industry, and in particular imports, it stopped working, and many of the people who worked at these centers stopped working. They were unemployed. The parliament, and in particular the Industry Commission two months before the Eid in the Business Enforcement Act, has been one of the issues addressed by the attack, and in the discussion of automobile management, there is also a clause in the issue that car makers are required to scrap a car for each 14 cars manufactured. The Commission of Industries and Mines has tried to address this issue.” Vali Maleki, speaker of industry commission of parliament.

"When disposals occur, the supply of our casting units is actually provided, and this is an interconnected cycle. All iron and steel, copper and aluminum, and all metals that can be extracted and dispersed in the automotive industry into a cycle of production and becoming a piece. If not done, it will be difficult to supply the casting material. This is a two-way issue, and its profit reaches the automobile maker and part makers, and our spare parts are activated. In addition, more pollution is prevented.” He added,

According to Vali Maleki, a plan for organizing the market is scheduled to be sent to the parliament in a single week. This scheme, which has long been the only name to change, has turned the organization of the market into an automotive industry for months, has not yielded a satisfactory result, we should hope to see positive results with this plan, and in The requirement for automakers to be dismantled also needs to be checked out so that the lights of the emergency centers are turned on again.