Auto industry had experienced improvement of production in the past month and in this path needs the activity of updated part making but pat makers can’t continue in this condition because of their shortage of liquidity and previous demands. 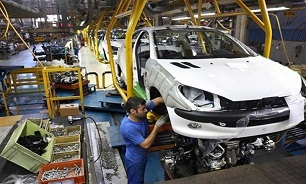 Activists of auto industry are hope to see this production increment continue but now there would be a question and that is it what should be took for continuing this achievement?

"Statistics show that car production has increased in past 2 months but continuing this condition needs planning and support. Automakers have the problem of shortage liquidity and they suffered 110 thousand billion IRRs in the past 9 months because of delay in pricing cars so without 10 thousand IRRs loan continuing this condition seems impossible.” Ahamad Nemat Bakhsh, secretary of automakers association told khodrocar reporter.

Now it seems that automakers have to have money to order parts but most important point is, does part maker wants to

Also, small and private sector makers have faced difficulties in recent years due to lack of timely payment by automakers. Regarding the requirements of the component manufacturers, some experts in the field believe that automakers generally believe that the machine tool should, in all circumstances, help the automaker, but that the machine tool maker has lost its power in relation to the past liabilities of the automaker. In order to survive, there are very bad conditions.

Experts also believe that if the past debts of car makers are paid to a piece of machinery, a small piece of machinery and a private sector can only meet the current needs of automakers and there is no way to increase its production. For the last seven months, manufacturers have lost their production capacity over the last seven months due to rising prices and cash purchases of raw materials from the market and supply of products to the automaker.

In the current situation, the components of the tools are much lowered, and on the other hand, in order to increase the volume of production, the hardware needs to be upgraded by the component makers, which has not been upgraded and upgraded due to many problems in this industry.