Exportation of cars was an organized plan of the ministry in recent years but it didn’t happen because of different problems each time. 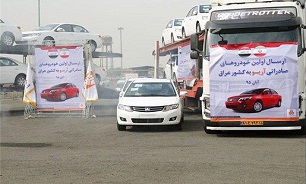 Khodrocar – After currency price increment in past months and costs of production increment few people thought about the advantage of this price increment for the production section. This advantage can be a chance to develop with a proper plan.
Currency rate increment made lots of problem for the economy and society of the country and even automakers face with challenges but it’s also a great chance for exportation.
With a look at the global market we can see that there is no car with a price tag of 4000 $ or lesser. Only a weak 3 cylinders from Tatamotors exist which is weaker than pride.
Now imagine if automakers could supply parts and start production to export their products with an excellent price in the global market. It could be nice for the country’s economy, supplying liquidity and increasing employment.
"Currently with this price increment, final price increment of Iranian products is less than 4000$ that no cars exist in the world with this price so Iranian can be clever and find new exportation markets to bring exchange to the country.” Karegar Samani, an expert of economy affairs told khodrocar reporter. "There should be a good relation between university and industry to design and build a new car to find new markets.”
"With the problems that happen to the transferring currency exportation is not very well and decreased.” Amir Hossein Ghanati, chairman of auto industry affairs of the ministry told khodrocar reporter. "We have this advantage to export car to Iraq and Syria with price of 4000 to 5000 $ but currently we have problems in shipment and logistic plus if currency problems solve then it could be a chance to expand exportation.
"Vehicle exportation decreased for 20 percent and we have a long way to reach or goal in exportation and we hope to have an improvement after solving problems. The goal for car exportation was 100 million $ but in the first 6 months we had 20 to 25 million dollar export to Iraq and Syria.

Now, the managers of the automotive industry have to look at these days when they are more focused on controlling the conditions of production, supplying the parts and providing the necessary resources for the continuation of the production process, half the glance at this advantage and creating a compulsory increase in the exchange rate.