The key of Somaye building has been handed 3 times during Rouhani’s presidential period. Now a couple of months have passed since the new minister came but was he effective during his working period? 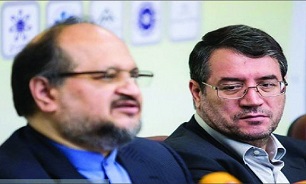 Khodrocar – Since the day Rahmani became minister of Industry, Mine and Trade most of economy activists especially merchants and artisans were waiting for his decisions because he knew the problems of this section due to his experience in ministry and parliament.

But Rahmani is not doing very well in any sections and he had poor performance in different parts. For example, he hasn’t made a good and effective decision about the vehicle pricing and on the other hand car importation section is getting weaker every day. Meanwhile some experts support him as the minister and they were hopeful to see some changes during Rahmani’s period.

"Right now most of ministers have experience in their field and youthfulness could be positive in the current situation because he can be the second young minister of the cabinet and make good movement in the ministry.” Farbod Zave told khodrocar once Rahmani became the minister.

Today he may change his opinion about Rahmani because he became the minister to focus on inner production but his decisions wasn’t good at all. For instance, he should know well about the side effects of delay in pricing vehicles and the pressure on the automakers and part manufacturers but nothing has happened yet.

The minister who claims to know the production and industry should know the pressure of stockholders on a business which produce with lose. He must know the impacts of delay in supplying first materials and he must know that increase of debts will kill the industry.
But what is the challenge facing the automotive industry in both the production and the import sector with numerous and obvious problems, and the new minister, like the past ministers, is completely passively looking away and taking the right direction to get rid of these issues.

Certainly Rahmani faces many challenges in the field of industry, mining and trade these days, but the automobile, as one of the country's most important industries, both in the field of employment and in the area of revenue, needs immediate and definitive determinations of decision-making, decisions It may be necessary to move some chess pieces of industry inside the ministry.
Reza Hosseini / CEO of Khodrocar
Tags: Khodrocar
Visit Home Send to friends Print
Share To:
subscribe to newsletter
Your Comment