It’s been a while that imported cars are stuck in the custom and can’t have permission to enter the country. These cars are parked in the customs and this can be harmful for them and they will have physical and mechanical problems. 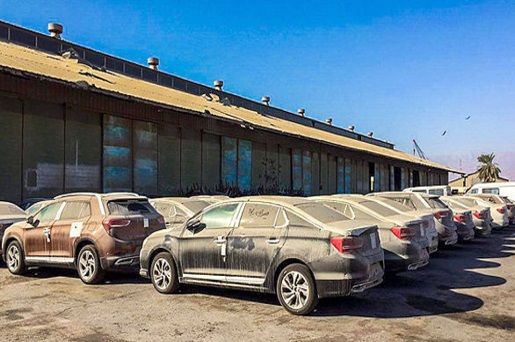 Khodrocar – According to what standard organization said inspectors started their work since 3 days ago to check production lines for the 85 indexes of standards. The thing with low attention is standard of imported cars.
The deputy of standard organization said that all imported cars have 85 indexes of standards but now most cars are stuck in the customs and they will have problems if the clear from customs. The question is will these cars repair before delivering to the customers because they must have different problems and if they have to be repaired then companies will face shortage of components and losses a lot.

However right now clearing stuck cars in customs is waiting for the governmental decision and few days before Saeed Ahmad Khani, public relation of customs said that the instruction of clearing cars has not been signed yet and customs can only clear cars after the approval of this instruction.

"The government is responsible for this losses because the property of people is hurting from a bad decision of the government and importer can’t do anything. Tires, dashboard plastic, seats, steering wheel and electrical parts will have problem after this long stuck and need to be repaired. All these repairs will cost a lot and the government should pay for it and we will follow it.” Mehdi Dadfar, secretary of vehicle importers association told khodrocar reporter.

"How long this stuck continue more losses will be for customers, economy activists and businessmen and after that the government will suffer.” He added. "Importers paid a lot for this problems and we are not responsible for this turbulence in business atmosphere but the government is responsible.”

"We imported these stuck cars 1 year ago with the standard of that time but the government made problem for us and it is not logical that we should pay for the bad decision of the government. We hope that standard organization support us in this matter.” He said.

The fate of cars in the customs remains unclear, and it is not clear when these vehicles will be released. Every time the government says it is so, that as soon as possible, these cars will be cleared out of ports, but it still will not happen. In the same vein, Mohammad Reza Modudi, the director of the Organization for Trade Development of Iran, said yesterday that significant measures have been taken to clear imported cars in the customs warehouse, which is due to be formed by the formation of a working group to accelerate the clearance of decomposed goods. It has to wait and see whether this will happen, or that the clearance of these cars remains to remain in the midst of ambiguity.
Khodrocar Translator: Amin Zamani
Tags: Khodrocar
Visit Home Send to friends Print
Share To:
subscribe to newsletter
Your Comment