Concerns of Automakers for Capabilities during Sanctions/ How much Local Platform will Work?

Sanctions are focused on the development and improvement of auto industry but using local capacities are the best ways to turn over the sanctions. 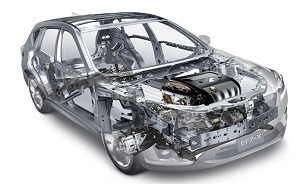 Khodrocar – Auto industry is and international industry which contains science, technology, equipment and tools relation between countries and this is excellent point turns to week point in the sanction period.
During sanctions, auto industry could be more active and can use inner capabilities for parts and platform. During past years some activities have been seen in automakers for example SAIPA made a platform but mass production is still in a shadow.
Days before, Mohammad Reza Honari Kia, chief deputy of SAIPA group said that the best way to expand auto industry during sanctions is working on local platform and expand relation with strategic countries.
Also Saeed Madani, former president of SAIPA told Khodrocar reporter that paying more attention to inner platform could be helpful because these platforms are designed for Iran and can work with domestic components. Producing based on local platform reduce the final price and can make a good exporting chance.
"The plan of domestic platform is incomplete over the years but it must be a movement in this matter to use the platform in the current condition. Producing a national car is a wish for us and if we continued what we did for Samand, now we had more variety in our market.” Ali Moradloo, expert of auto industry told khodrocar.
"In recent years we missed the local production and using local capacity so finally producing cars like Quick and Roham are not going well.” He added.
"For several time suggested that automakers can produce platform cooperatively and reduce production cost. 10 years ago this matter began but never continued. Kia, Hyundai, Nissan and Renault are producing platforms cooperatively and our automakers are not bigger than them.” He added.
He also added that, potential and enough capability is available in Iran and localization in sanctions period is reachable and if automakers move forward then part makers will support them. With a good plan national production with national soul is reachable.
Khodrocar Reporter: Hadi Sianaki
Khodrocar Translator: Amin Zamani
Visit Home Send to friends Print
Share To:
subscribe to newsletter
Your Comment