Auto industry is a strategic industry in the country and in the sanction condition it face with serious challenges and it needs support and right policy of the government to continue living. 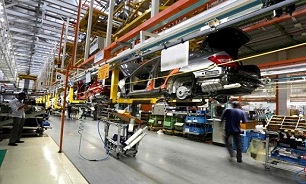 Khodrocar – Auto industry is a strategic industry in our economy system and that’s why the president of USA decided to put sanctions on auto industry and somehow they point most important part of Iran’s economy. USA tried this sanction before and it challenged auto industry.
In the previous period of sanctions production rate decreased significantly and prices increased also Korean manufacturers cut their relation with Iranian part makers and Chinese replaced them in the our market. In the current period even relation with Chinese companies is in a shadow, in addition currency rate turbulence has challenged automakers.
"New sanctions are harder than before because in addition to foreign problems, automakers didn’t reduce price in recent years and somehow they prevent price increment. Also, China doesn’t have previous relation with us anymore.” Saeed Madani, an expert of auto industry told Khodrocar reporter.
"Psychological effects of sanctions were more hurtful and start the production reduction before sanctions began. Auto industry need the support of the government.” He added.
Madani Believes that part manufacturers should be active and their liquidity should be supplied. Part makers can’t risk with more credit and automakers must prepare financial support for part manufactures and in this way most of unfinished cars would complete.
"Inner Platforms must have more attention because these platforms are designed to work with local components and it will help automakers to produce better and easier.” He said. "If vehicle price increment happen according the side market today, it will not solve the problems and its effect will last for a while, so the main task of the government in the current situation is to provide liquidity and financial support to the automotive industry.”
"Rial liquidity, Dollar liquidity and banking breath are the main things that government should prepare for automakers because in the sanction period a good think and more activity can guarantee the existence of auto industry.” He said finally.
Khodrocar Reporter: Hadi Sianaki
Khodrocar Translator: Amin Zamani
Tags: Khodrocar
Visit Home Send to friends Print
Share To:
subscribe to newsletter
Your Comment