In the past recent months activists in transportation section faced tire problem. This happened while the ministry of Industry, Mine and Trade approved the permission of importing tire but problems are still here. 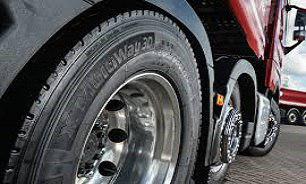 Khodrocar – Shortage and high cost of tire is the problem of activists in transportation section of country and after months the problem is still here and drivers of heavy vehicles are struggling with it. Mohammad Reza Koochi member of the parliament said that right now we need 500 thousand tires and the shortage will become 1 million at the end of the year. We believe that some organizations are not putting effort.
Meanwhile, the ministry of Industry, Mine and Trade said order registration for needed tires have been done and documents are sent to the central bank for supplying currency. Central bank said they don’t have any problem to supply the currency. The unclear thing here is why problems of supplying tire are still here?
"The main problem is if the credit supplied then it will take time import and supply needed tire. Tire is not a thing to buy from supermarkets.” Mostafa Tanha, speaker of tire manufacturer association told khodrocar reporter.
"In order to supply needed tires of the country we have to put order for foreign supplier which is Chinese company. They will take the order and start manufacturing then it will take a month to transfer the products to Iran.” he added.
"We shouldn’t forget that allocation of currency from central bank is a thing and if they allocate the money then we should see if we able to use it. This problem is not only for importers but producers of tire are having problem to supply first materials.” He said.
"Right now, Conelon bank of China is not working with Iranian banks anymore and they stopped all of their relations with Iranian banks since the beginning of November. No other bank has replaced it till now. So it means that we are not able to use the allocated money anymore.” He continued.
"Chinese company sent a letter to us and said »The government of China has not decided about the sanctions of USA against Iran and all transportation and relations are suspended.« in this situation what could ministry does? This problem should solve by higher ranked organization and even ministry of economy or ministry of foreign affairs.” He said.
Losing time to solve the problem of currency relations would hurt the stability of production and economy then the country will suffer much more. If the problem of truck owners not solve then they won’t move their vehicle and most of industries will standby even food industry would hurt which is strategic and important. In the next step transit and transferring people will have problem.
Khodrocar Reporter: sepideh Ghazinejad
Khodrocar Translator: Amin Zamani
Tags: Khodrocar
Visit Home Send to friends Print
Share To:
subscribe to newsletter
Your Comment

Buyers’ complaints were successful/ Depot cars are reaching to clearance