The auto giant said in a statement Monday that "over many years" Ghosn and board director, Greg Kelly, had been under-reporting compensation amounts to the Tokyo Stock Exchange securities report. 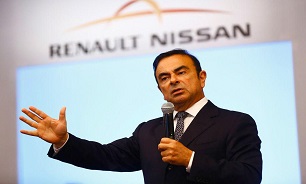 khodrocar- Nissan added that, in regards to Ghosn, "numerous other significant acts of misconduct have been uncovered, such as personal use of company assets."

Nissan said its Chairman Carlos Ghosn is under investigation after he allegedly violated Japanese financial law.

The auto giant said in a statement Monday that "over many years" Ghosn and board director, Greg Kelly, had been under-reporting compensation amounts to the Tokyo Stock Exchange securities report.

Nissan added that, in regards to Ghosn, "numerous other significant acts of misconduct have been uncovered, such as personal use of company assets."

Nissan said its Chief Executive Officer Hiroto Saikawa will now propose to the Nissan Board of Directors to remove both Ghosn and Kelly from their roles.

The Japanese auto firm added it been providing information to the Japanese Public Prosecutor's Office. One Japanese media outlet, Yomiuri, reported Monday that Ghosn had been been arrested, but CNBC wasn't able to independently verify that report.

Nissan shares had already ceased trading on Monday when the news broke but Renault shares — with Ghosn also being the CEO and chair of the French automaker — hit their lowest level in three years. Renault stock was more than 13 percent lower, shortly before 12:00 p.m. Paris time.

Nissan and the French government each own 15 percent of Renault. In turn, the French auto firm holds a 43 percent stake in Nissan. In a statement Monday, the French president Emmanuel Macron said he would be extremely vigilant over the stability of the alliance between the two companies.

A brief reaction note from analysts at Citi Research on Monday said the volatile share price reaction showed how pivotal Ghosn is for any potential collapse of the Renault-Nissan structure.

Citi added that while Renault's stock trades at about a 50 percent discount to its ten-year average, this discount would likely rise should Ghosn depart as he is "viewed as the chief architect of any solution."

Ghosn is considered a hugely influential executive within the global automotive industry. The cross-ownership alliance of Renault, Nissan, and Mitsubishi have all enjoyed an upswing in fortunes under his leadership. After successfully restructuring Renault in the late 1990s, Ghosn earned the nickname "Le Cost Killer."

Born in Brazil, Ghosn became the world's first person to run two companies on the Fortune Global 500 simultaneously when he assumed the CEO roles at both Renault and Nissan in 2005. He stepped down as Nissan CEO in 2017.

In June this year, Renault shareholders voted by a slim majority to approve a 7.4 million euro ($8.4 mn) pay package for Ghosn's work in fiscal 2017. According to other securities filings, Ghosn earned 735 million yen ($6.52 million) from Nissan and 227 million yen from Mitsubishi for the same period.