The potential of producing bus has remained unseen in Iran and because of that importation increased and most producers are closed. 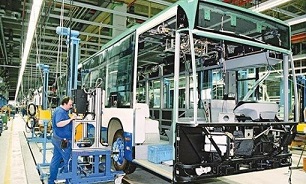 Khodrocar – Statistics of producing bus are not showing anything interesting, reviews showed that producing bus has been stopped in 3 companies at the first months of the year and production reduced by 22.5 percent. Also in May average production has decreased for 46.1 percent to 76 busses in a month.
The reducing procedure has continued through months and even reached 0 in some companies for example IKCO Diesel has stopped production and reduced its production rate form 38 units to 0 unit in this year. Totally, in the first 5 months of last year 651 busses produced but this number reduced to 366 units in the current year. This mean production rate has decreased for 43.8 percent.
Producing bus has faced several challenges since the beginning of year and some companies like, Shahab Khodro, Asna, IKCO Diesel and Ramak Diesel has zero production in a month. Meanwhile, some officials in municipalities are talking about importing second hand busses.
"There are 2 major points in producing bus in Iran. First, busses have special customers in Iran. It means that the main customers of busses are the government, municipality or other related organizations. Second is that busses are expensive. Other point is technical knowhow and high technology for producing. All these matters had ride busses to sides.” Hassan Karimi Sanjari, an expert of auto industry told khodrocar reporter.
"We need to have a targetful plan for saving bus industry. This investment should have a goal and while they have a place in replacing worn out vehicle and the budget but they never meet this budget and their own share. As importation is too easy and fun so people and even the government is thinking about the future and they want to find out about the life of others. Of course, updating the logistics fleet inside and outside the city is a very necessary and necessary task, and it can’t be denied.
"Postponing the investment in this industry will hurt the whole industry and we may reach the technology inside. But in some cases necessity will force them to do what they never do. If capacity activate in here then important share of supplying transportation fleet will be covered by us. " He added.
"Bus is a vehicle and like other vehicles have problems like what we have now. But, I believe, we do not say that in commercial vehicles, if we pay enough attention and investment, the most up-to-date buses with the highest levels of technology produces, but we can meet the needs of the country. "
The expert believes that there are some module manufacturers in can support in engine and gearbox models. However can’t put sanctions away. Sanctions focus on auto industry and bussed are belong to this country. As in commercial vehicles, the level of technology and technical knowledge is higher than that of riding a ride. But there is, however, that there is such a level of potential and inner potential to overcome these sanctions, which needs to be addressed.
Khodrocar Reporter : Sepideh Ghazi Nejad
Khodrocar Translator: Amin Zamani
Tags: Khodrocar
Visit Home Send to friends Print
Share To:
subscribe to newsletter
Your Comment