What Will Happen to Importers Companies’ Customers?

Most of importers companies faced with selling problems after importation ban and some of them closed their doors but now the most worry of customers is what will happen to their after sale services? 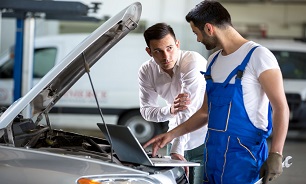 Khodrocar – after the importation banned importer companies shrank and lost their human resource. Those who had hopes now with the second phase of sanctions are going to close their companies. Even Mahdi Dadfar, secretary of car importers association told that 60 percent of importers companies closed and the rest of them are half close. However the real worry of customers is what will happen to the after sale services of these cars?
After sale services in Iran had challenges before sanctions and importation ban and now with current condition we can’t see the future of this matter.
"There are 2 different aspects about this matter, first internal problems are important while order placing is banned we can’t have original components for imported vehicles because for these cars all components should be supply by the mother company.” Vahab Aghaei, expert of after sale services told khodrocar reporter.
"Second, sanctions began and we read that components and goods exit from Dubai has been banned then those who imported components from Emirates should find a new source and now while middleman comes in prices of components will increase for 20 to 100 percent and customers should pay higher prices. This time is not good at all because car sale has problem and it will infect after sale service.” He added.
"It is predicted that in this situation people will use their vehicles less because the price of repairing is too much and they can’t pay for repairing engine or gearbox. On the other hand, importer companies should fulfill their promise about guarantee and supplying components. I think in the future repairing parts will be more often.” He said.
"If importation ban continue then importers companies will be closed but they have commitments about after sale services that should fulfill but how they can fulfill commitments? In this matter the government should be more harder to force them to fulfill commitments.” He said. "When companies are forced to provide services in an unfavorable situation, the cost of their services rises, and in fact, a dispute between the company and customers is created. Companies can’t fulfill their obligations because they do not have the power and resources, as well as the dispute between customers and shirts in the sales area is also created in the discussion of after-sales services.”
According to what this expert said, if the economy situation managed then after sale services could be a source of income for companies. For instance if a company couldn’t sell cars then they could have income from after sale services but the after sale service is a week point in our auto industry.
Khodrocar Reporter: Sepideh Ghazi Nejad
Khodrocar Translator: Amin Zamani
Visit Home Send to friends Print
Share To:
subscribe to newsletter
Your Comment