Scrapping Worn out Vehicles Require a Change of Attitude

Two weeks has passed since Reza Rahamani became the minister of Industry, Mine and Trade ministry and the auto industry needs more specific plans. He talked about a couple of plans before becoming the minister but the auto industry waiting for more plans. Scrapping worn-out cars and exemption of domestic automakers while importation banned is one of important matters. 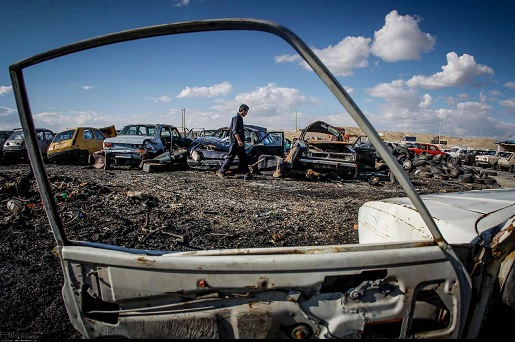 Khodrocar – Since 1 year ago when the government decided to exempt domestic automakers from scrapping cars till now, there were lots of decisions around this matter but these days even while the new minister has selected we are not seeing any differences in this section.
In these days we haven’t hear anything about the plans around scrapping cars and Rahamani just said that "Most of scrapping was from importing cars and now while vehicle importation banned we are looking for some replace paths for this matter even in commercial vehicle section.” He also said "In the current situation of the country, vehicle importation ban was a good idea and we forced the automakers to increase production rate with high quality.”
Now the question is what’s the plan of second minister of industry for the future of worn out cars? Does his plans beneficial to prevent Tehran from transforming to a parking for worn out cars?
"Unfortunately, I have to say that since the importation banned about 70 to 80 percent of scrap yards broke and closed or they are near to close even active site are not in a good condition. Participation of domestic automakers in scrapping cars has been approved by the commission but it needs the approval of the parliament.” Mostafa Joodi, chairman of the board of scrapyards association.
Two weeks after the resignation of Reza Rahmani, who had been sitting behind the Ministry of Interior's office of work, there was no serious decision to save the scourge, while the car's spare parts require changes to the decisions. And apply everything which are for the future of this industry.
Khodorocar Reporter: Negar Mir Karimi
Khodrocar Translator: Amin Zamani
Tags: Khodrocar
Visit Home Send to friends Print
Share To:
subscribe to newsletter
Related News
“No Entrance” Sign in Front of Auto Industry
Iran’s Position in Vehicle Industry Revolution
Delay in Plan of Organizing Auto Market
The Plan of Organizing Auto Market Changed
Your Comment