Together with the MIT Energy Initiative, Dalia asked 100.000 people around the world how they travel from place to place. 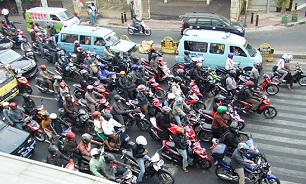 Khodrocar - With respondents from 52 countries, the survey represents 75% of the world population. While the study found the global share of commuters who use a bike or motorcycle is at 10%, there are significant differences between countries.
Pakistan 35%
In Pakistan, motorcycling is becoming more popular, particularly among women. The Women on Wheels Organization (WoW) has been making waves in Pakistan as it provides motorbike training sessions for women who are seeking more independence.
India 40%
According to the Times in India, India has surpassed China as the largest market for two wheelers. Like in Pakistan, a large part of this growth is due to increased demand among women riders. Its also a way for commuters to more easily navigate bad traffic.
Taiwan 48%
Taiwan is another country that heavily relies on motorbikes and scooters for its transportation needs. Electric motorbike use, specifically, is even incentivised by the government as a way to reduce emission.
Indonesia 67%
In motorbikes, Indonesian commuters find a practical solution to avoiding crippling traffic. From 2002 to 2010 motorbike use has doubled and new motorbike-taxi apps are also on the rise.
Vietnam 79%
Vietnam’s transportation is centered around motorbikes. Hanoi, Vietnam’s capital has more motorbikes than households. In 2008, more than 80% of journeys in the city were by motorbikes and scooters. Vietnam has also become a vacation destination for motorcyclists who come from all over the world to ride through the country on their bikes.
Top 5 Cycling Countries
Germany 18%
It’s no surprise that Germany makes the top 5, considering the first bicycle was created in 1818 by Baron Karl Drais, a German. A version of his bike, also called the "Laufmaschine” or the "dandy-horse”, is still used today as a training bike for young Germans.
Japan 19%
Japan has a large population of "tsukin-ists”, or workers who use bikes in order to escape the crowded trains on their daily commute.
Sweden 19%
Not only does Sweden boast a significant share of bike riders, but thanks to the country’s efforts in bike lane maintenance, Swedish bikers ride even in the worst winter weather. A city in Sweden has even run an incentivised experiment to get people to abandon their cars for greater bike use.
Denmark 29%
Not only does Denmark have a rich cultural history of bike riding dating back to the 1800s, but biking has also become a notable symbol of the country’s egalitarianism: roughly the same share of Danes at all income levels use a bike to commute.
Netherlands 39%
In a country where there are more bikes than people, biking is a form of commute used by a huge share of the Dutch. Following backlash to increased car usage in the 1950s and 60s, the Netherlands’ bike culture grew in tandem with significant investments toward biking infrastructure. Today the Netherlands is considered one of the safest places for bike riders.
Tags: Khodrocar
Visit Home Send to friends Print
Share To:
subscribe to newsletter
Related News
The Plan of Organizing Auto Market Changed
Losing the Chance of moving technical Knowhow because of Government’s Laziness
Violation of the Trade Law with the Car Import Ban
The Breath of Auto Industry is Counting/ Auto Industry Awaits for Rahmanai
Your Comment