Car challenges of the ministry haven’t decreased since last year but they became visible every day in new form. The new challenge is renovating the heavy vehicle fleet which started very well but has lots of problems after the sanctions, shortage of parts and importation ban. Now the question is after the next week when second phase of USA sanctions began what would be the decision of new minister of Industry, Mine and Trade? 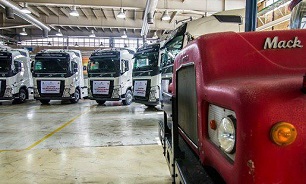 Khodrocar – The plan of renovating 202 thousand commercial vehicles fleet began in the second half of 1396 and promised to finalize it within 3 years with the cooperation of ministry of Industry, municipality and national standard organization but its speed lowered since the past 2 months.
The plan started powerful in the last February and continued to the March and Shariatmadari attend in all ceremonies about this topic and emphasized on executing this plan perfectly. But after the USA exits the JCPOA and restored sanctions the condition changed. Statistics show that in the spring and summer producing commercial vehicles was very well but it decreased after hardcore sanctions.
Statistics of producing commercials in 6 months
The state of production of all commercial vehicles show the increment by 27 percent compare to the last year. Also, production of bus, middle bus and minibus increased for 35.3 percent.
At the middle of August ministry of Industry, Mine and Trade announced that while the state of first 5 months show the production increment in commercial vehicles but they are under their nominal capacity and that is because of lack of liquidity, reduction of requesting and of course sanctions.
A few days ago state of commercial vehicles production announced which show an increment of 1.1 percent in the first half of the year. According to this statistic at the end of six months 8 thousand and 135 commercial vehicles produced. Certainly, the statistics of these productions are not satisfying at the moment.
"After we heard the opinion of new minister about the commercial vehicles, it was expected that the new minister pay more attention to this plan. Right now, Mr. Rahamani hadn’t said anything clear about the future of commercial vehicles while Shariatmadari’s policies were opposite.” Mehdi Niazi, expert of auto industry told Khodrocar reporter.
"During the execution of this plan some companies opened LC and bought their required parts to produce vehicles but some others didn’t succeed in importing parts so as the result some Chinese companies remain in the country. After the sanctions the other European partner left Iran.” He added.
"At the time, activity of some producers decreased and some others deactivated. Also, about two and a half months ago the instruction of Road Maintenance & Transportation Organization to buy second handed commercial vehicles were the last shot for companies had a few importation.” He said.
"According to this instruction the approval of importing second handed vehicles is concerning producers and importers which had a little hope. Four years ago this plan executed and some companies imported second hand trucks in the name of brand new and that made lots of problems.” He said.
However Rahmani the new minister of Industry, Mine and Trade said something about this plan but the concern has remained because sanctions will began and lack of parts and first materials. Some experts think that Rahmani should announce his plan before the plan of renovating 202 thousand commercial vehicles forgotten.
Khodrocar Reporter: Negar Mir Karimi
Khodrocar Translator: Amin Zamani
Tags: Khodrocar
Visit Home Send to friends Print
Share To:
subscribe to newsletter
Related News
Vehicle Inspections Would be more Serious?
Failure of the Government to Determine the New Price of Cars
A Look at Foreign Partners of Iran’s Auto Industry after Sanctions
Automotive Groups braked at Hafez Hall
Reviewing Forgotten Contracts/ The Durability of Part Makers' contract During the Suspension of the French Activities
Your Comment