Six months were needed for the auto industry to reach the ground after what it made in the past years. From expanding relation with automakers and part makers to increasing the production rate but everything back to the first place. 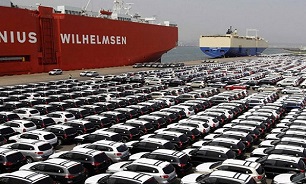 Khodrocar – The auto industry is getting weaker every day for example importation decreased, and production reduced in the first half. Once we thought the JCPOA could help the industry to move on but this year just stop the industry and made it to go backward.
Half of the year has been passed and auto industry had ups and downs. One day currency influence on car’s price, the other day ban of vehicle importation and the other day international relations limited and all of these reasons have reduce the production and importation rate.
Statistics are showing the backward way of auto industry and according to the customs importation decreased for 70 percent and production reduced for 15 percent.
These statistics showing that we are one year behind the vision plan right now however, the vision plan says that the auto industry should improve every year but now the production and importation has not reaching even to the half of last year.
According to the newest statistics of Iran’s foreign trade, in the past month about 1259 cars entered to the country and all together 13771 cars imported to the country in the first half of the year. In the same period of the last year 44695 cars imported to the country with the worth of 1 billion and 194 million dollar which decreased for 69.2 percent.
On the other hand, the production rate of September has decreased for 46 percent and in the first half of the year compare to last year it decreased for 15 percent.
In this situation, many officials and experts in the automotive industry say that the conditions for the automotive industry are alarming for the beginning, as six months later, a large part of the import and production opportunities have been lost. As a result, three months after the implementation of the new round of US sanctions against Iran, the alarming rhythm of the moderation of human resources in companies was heard.
The main concern is that in addition to next year, what will be the second half of this year for the automotive industry, and what are the deadlines for reducing the volume of car production and imports from the pit? Whether domestic production and, ultimately, automobile exports will offset the costs imposed on the automotive industry, and the employment of this sector will respond to the jobless needs of the unemployed in sectors such as car importer companies and contractors, or should we wait for a miracle to improve rescue Iran's automotive industry.
Khodrocar Reporter: Negar Mir Karimi
Khodrocar Translator: Amin Zamani
Tags: Khodrocar
Visit Home Send to friends Print
Share To:
subscribe to newsletter
Related News
Commotion of Fuel Card Revival in the Way of Gasoline Pricing
Auto Shows, Opportunity or Threat?
What would be The Conclusion of 85 Standards?
Few Steps to Transform Tehran To a Parking for Worn-out Cars
Your Comment