Economy challenges and pressure of sanctions has been increased in the past months and worriness is rising about the quality of products and sanctions may have more effect on the industry. 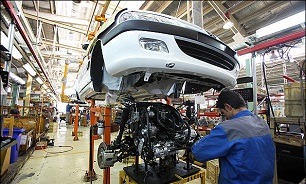 Khodrocar - The quality of domestic products has been a hot topic among people and officials and most of them are agree about the low quality of these products. Most of experts say that as the prices are rising the quality of cars are decreasing .
Some experts believe that the low quality of cars is because of poor quality Chinese parts and on the other hand the procedure of producing cars is not okay in Iran.
As the sanctions are focusing on the auto industry, automakers and  part manufacturers are facing challenges in their production.
"According to what we prepared for the IDRO, fortunately there is no difference in the products yet. Some thinks in the future there will be some differences. Because of tensions in the market there are some small changes in some cars but nothing odd happened." Arash Golpayegani, CEO of ISQI told khodrocar reporter.
"As we mentioned there were no changes in quality and some cars even improved. In our auto industry there is average of 139.2 minus points and this number was 140.6 minus points in August. We sure can say that till now there are no significant changes in the quality of cars." He added.
"These are initial Inspections and problems may happen in the long term. If automakers using low quality products maybe initial inspections won’t show them at all. Totally, we can say that we didn’t have any quality drop in the past month.” Golpayegani said.
"In the case of the IQS index, which was last reported in July, the average industry index is 3.38 problems per vehicle, which is better than the same period last year, most of problems are solved compare to last year and even they improved for 10 percent. It's fortunate that in the IQS index until July of this year there is also no specific effect on new condition." He continued.
"Low quality parts except from their origins will drop the quality of final product. I disagree with some people who say Chinese parts are low quality because we had relation with them and saw that they improved very well. Most of them are using the best up to date European equipment for testing and producing parts.” He added.
"Four or five years ago when Chinese entered our market we could say that their supplied parts were not good but now they improved a lot. This goes back to the manufacturer and the type of material used to make the parts, and naturally the order we carry out.” He told Khodrocar reporter.
"We shouldn’t see the auto industry negatively because anything can happen to the industry due to the current conditions. As I see companies are trying to prevent problems and they are considering the standards.  In the last two months, the discussion of the quantity of production has been under scrutiny, and a smaller number of products are being produced by corporations. If this trend continues, its works will naturally also be seen on qualitative discussions, because of economical outcomes and deficiencies which can also be on the quality of the Governor's thesis. We hope that the conditions will not be forthcoming and that we will not move in that direction.” He added.
As it seems automakers are not exiting the quality road and they are struggling to prevent any quality problem. We should hope that next months, problems and sanctions can’t prevail over the automotive industry.
Khodrocar Reporter: Sepideh Ghazi Nejad
Khodrocar Translator: Amin Zamani
Tags: Khodrocar
Visit Home Send to friends Print
Share To:
subscribe to newsletter
Your Comment

Meaningful presence of ministry of industry’s supervisor in Saipa