The car's price turbulence in the dollar fluctuation rate

The auto market was experiencing some decreasing and price of some cars reduced in the past days but after the exchange rate increment they moved fast toward their previous prices but Is the dollar, the only reason for the car market failure? 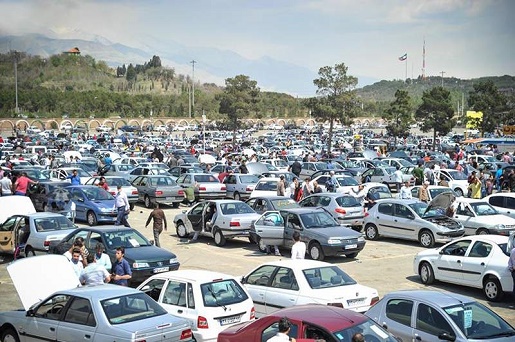 Khodrocar – Auto industry has been challenged due to the currency rate tension, expensive material has increased the final price and part makers are not able to supply parts. Automakers tried to balance the market by some pre-sell plan but right now the price of dollar is controlling the market.
"The auto market has reaction to the official currency price and doesn’t work with the market price. If the market price had influence on auto market then price increments would be more and no one had the power to buy car. These price challenges are temporary and they are reacting to the tensions of market and they will restore to their before position.” Abdullah Babaei, an expert of auto industry told khodrocar reporter.
"As the price is reasonable, automaker would be able to produce more cars. Since the price is not reasonable and they can’t increase prices then their power of production will decrease. Automakers are using their own money to produce. They should buy materials from part makers and since the price of first materials increased, the price of cars should increase too. Pricing should be standard and be on automakers responsibilities.” He added.
"It’s more logical to give the market management to automaker. Pricing should be liberalized otherwise the market will be challenged. For sure they will pay their debts to part makers and the government will help them but they would be late. It would be better to see the automaker is controlling the market because they know the market better but they don’t have the ability.” He continued.
"I don’t know much about the FATF but if it’s a way to open the swift and have relation with foreign banks then it could be a great chance for auto makers to decrease their worriness for suppling first materials.” He said.
Although the exchange rate was going down, the dollar has risen again but the negative conditions on the automotive market can’t put down prices, by reducing the exchange rate alone. At first, the conditions for the production and supply of automakers will return to their normal state, so that the car market can go back to the true price path.
Khodrocar Reporter: Sepideh Ghazi Nejad
Khodrocar Translator: Amin Zamani
Tags: Khodrocar
Visit Home Send to friends Print
Share To:
subscribe to newsletter
Related News
What is The Future of the Ministry of Industry?
Part Makers Hoping to Receive 70 Thousand Billion IRRs Demands
Effects of Auto Importation Ban will became Visible Slowly
Effects of Stay or Leave of Ministry on Auto Industry
Part Manufacturer One Step Away to Lay-off Workforce
Your Comment