Challenges of Production and Prevalence of Motorcycles in Iran

Producing electric motorcycles has been talked lately and different organizations like IDRO and budget organization has published calls for assembling and producing motorcycles but does we have the infrastructure for this in Iran? 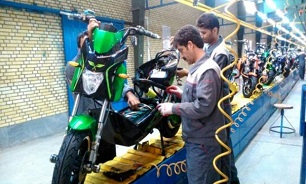 Khodrocar – As the officials believe everything in about electric motorcycle in Iran are just talks and we never had a serious move about it. Though hybrid and electric cars as well as motorcycles around the world are considered by municipal officials and governments and are intended for promotion among people, special promotions and facilities.
As the motorcyclists are from the lowest section of the people and supplying their family with it, companies should think about attracting this people to help the prevalence of these motorcycles. However, the infrastructure is not available in Iran and motorcyclists are not even using injection engine bikes.
High prices and lack of technical knowhow in Iran is the reason of shortage of electric bike and ministry of Industry, Mine and Trade is not working on it. One of the problems that exists in the development and propagation of electric motorcycles is the creation of charging stations and charging bases of this vehicle, which the government seems to have yet to create the necessary infrastructure and suitable platforms for the entry of these products to the streets.
"Before the government enters the electric bike project there was some research about it in the association and a couple of companies started to produce some models.” Bahman Zia Moghadam, secretary of Iran’s motorcycle industry told Khodrocar reporter.
"While the necessary infrastructure for them is not ready in Iran it won’t get popular. Some things like facilities should be ready to make this happen. The main argument in this regard is that the price of these products and the other is a little welcome and lack of demand in the market for the purchase of electric motorcycles is another problem.” He said.
"The final price and maintenance costs of electric bikes are too much and batteries need replacement after two years battery of electric bikes need replacement after 2 years which costs near 50 percent of the bike price but old motorcycles are not like this.” He added.
Governmental and municipal authorities can also play an important role in the development and promotion of electric motorcycles. Creating infrastructure for this type of motorcycle and easy access to charging bases and easy purchase and after-sales services will help. The municipality can also accelerate the process by developing and distributing electric motorcycles for free (like bikes) and their collaboration with the Motorcycle Association.
Khodrocar Reporter: Sepideh Ghazi Nejad
Khodrocar Translator: Amin Zamani
Tags: Khodrocar
Visit Home Send to friends Print
Share To:
subscribe to newsletter
Your Comment