Car’s Market: from Price Shock to the Influx of Buyers

Investors are getting confused these days, some of them are selling their houses to invest in imported cars but it was opposite before. In this messy market what is the solution for keeping the car’s market away from transforming? 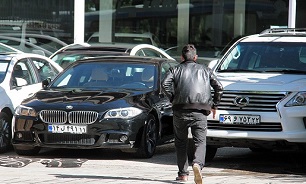 Khodrocar – once upon a time building and property had a great market and everyone would spent their money in this market but after the stagnation of this market and bank’s interest rate reduction, most of investors changed their filed and start to invest on the imported car’s market.
On the other hand, some people are buying cars because they want to sell them in the future when prices have hit the ceiling. However, this procedure is not new in Iran and each time a commodity is getting expensive then it faced with a shortage in the market. Now by the rising of imported car’s price people are trying to buy them as much as they could.
The reduction of car’s importation started las summer when the SABTARESH website shut down for 6 months and now this market has faced with serious problems. Secretary of car importation association said that the number of imported vehicles to Iran in the first 2 months of this year is less than 2000 unit.
This decrease in imports is due to the domestic and international pressure and it attracted some undecided finances to the car market. Now, today’s market which is balancing with the dollar price has a shadowy future and we are facing with 150 to 600 million IRRs price differences in some models.
The most important issue in the current situation is that some investors are inexperience and they just bought cars for their own usage so they don’t know how to sell a car. These kinds of people will hurt the market mostly. We saw such a thing in the past years like 1386 and 1392 when the house price boosted to the moon. At that time no one tried to control the market so house market hurts a lot. In the recent months, the average rate of buying cars where more than usage and it seems that people are like to invest in this market more than anywhere else.
"Naturally, investors should trust the market and society economy condition but this trust is vanished from banks. In this situation, prevent to make next mistake is a priority. Planers should have a plan to attract the finance. For instance, Central Bank could sell bonds in order to attract the money from the market.” Ali Asghar Pour Matin, an economist told Khodrocar reporter. "In the current situation people don’t trust the government policy so they do what they want to do and will attract to the better market.”
"The government’s clarification is the only way to exit this condition. On the other hand, recent happenings in the parliament could make problems for the banking system in investment attraction. Because in the current condition finances aren’t invested and people are not trusting banks to put their money there too, so some markets like cars will have more investors and prices are increasing.” He added.
"Car’s price increase and it’s predictable that this procedure will continue till the September because no planning has done for it yet. But on the other side, the government said that nothing will happen and they just stop the preselling coin. In this condition abusing the market will increase and cars are included.” Pour Matin continued.
It seems that people eager to buy cars is transforming the car market to something like house market in 1392 which had doubled prices in the first couple months but it just went toward stagnation for more than 5 years. Now this may happen to the car market too and economists think that price increment could be a sign of many years of stagnation.
Khodrocar Reporter: Negar MIr Karimi
Khodrocar Translator: Amin Zamani
Tags: Khodrocar
Visit Home Send to friends Print
Share To:
subscribe to newsletter
Related News
Iran Car Market: Need to be Organized
What is the Destiny of Automotive Contracts?
Does Mazda Remain in Iran’s Market?
Your Comment