Takata Corp's bankrupt U.S. business will ask a federal judge on Wednesday to suspend lawsuits against automakers that have been brought by people injured by its faulty air bag inflators, something that opponents say is an abuse of the law. 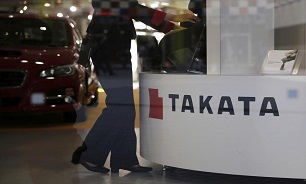 Khodrocar reports, Takata and TK Holdings Inc, the company's U.S. unit, filed for bankruptcy in June and said they faced tens of billions of dollars in liabilities from its inflators, which are subject to the biggest recall in automotive history.
Bankruptcy automatically stayed hundreds of lawsuits against TK Holdings for wrongful death, injuries, economic loss and breach of consumer protection laws. But in July the company sought a preliminary injunction to suspend lawsuits against automakers that use its inflators.
Without the injunction, Takata said the litigation would distract management from completing the sale of the company's viable operations to Key Safety Systems for $1.6 billion and could threaten the supply of air bag inflators to replace recalled ones.
Plaintiffs' lawyers called the requested injunction "an abuse of the bankruptcy laws for the benefit of all of the world's largest automobile manufacturers." They said Takata's request would delay consideration of plaintiff's lawsuits for six months or more, which would be a very long time for the plaintiffs.
The official bankruptcy committee that represents injured drivers said in court papers the injunction would have "human consequences" and prevent people from pursuing compensation.
The committee cited the example of a 23-year-old New Jersey woman whose quadriplegia resulted from brain injuries that a government investigator said were caused by a faulty Takata air bag.
The woman's lawyers estimated her economic loss would be $18 million, which does not include potential damages for pain and suffering.
At least 18 deaths and 180 injuries worldwide have been linked to Takata air bags. Takata has said it expected 125 million vehicles worldwide to be recalled by 2019.
Takata set aside $125 million to compensate those injured by its air bags as part of a guilty plea, but plaintiffs' lawyers argue it will not be enough.
Major automakers including BMW AG, Ford Motor Co, Honda Motor Co Ltd and Toyota Motor Corp sided with Takata in backing a six-month delay in lawsuits, arguing in a court filing that doing so would "advance the interests of their customers and the safety of the motoring public by increasing the likelihood" the Takata restructuring will succeed and "protect the supply of replacement inflators and diminish the risk of future deaths and injuries."
Source: Reuters
Tags: takata airbags ، takata bankrupt
Visit Home Send to friends Print
Share To:
subscribe to newsletter
Related News
Ford to petition to avoid immediate recall of 2.2 million vehicles with Takata air-bag inflators
Australian man likely 18th death from faulty Takata airbags
Your Comment