The owner enjoyed the best and worst parts of Ferrari ownership in just 60 minutes.
According to Khodrocar, the Ferrari F430 Scuderia is a hardcore, lightweight, 503-horsepower monster that can certainly be driven on the street, but is primarily intended for track use. Regardless of the location, handling such a machine at a level that approaches the car’s limits – even with the various electronic assists available – requires a great deal of confidence and expertise at all times. To buy such a car is surely a dream for any Ferrari fan, so we certainly feel for this fellow who had his dream then lost it all within the span of just one hour. 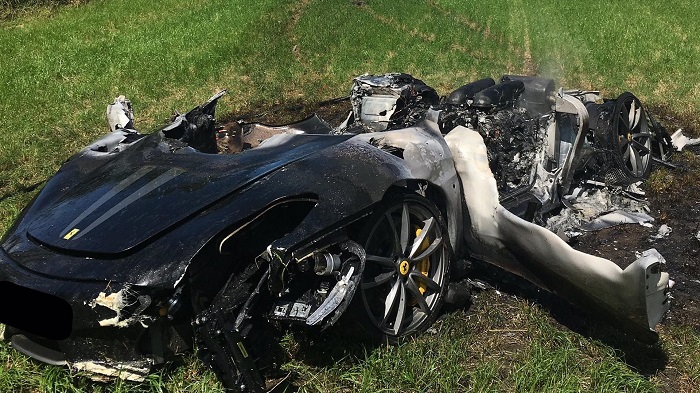 The good news here is that the driver of this mangled mess reportedly walked away with just cuts and bruises, despite the end result which sure looks like a non-survivable event. The accident occurred in a South Yorkshire neighborhood in the United Kingdom, at the hands of a 31-year old British man who just bought the car for £200,000, or about $262,000. Ouch.

It’s reported that he lost control of the car on wet road conditions, went airborne, and launched down a 50-foot slope. Once the car finally came to rest the driver was able to escape with minor injuries, but then he had to watch fire consume what was left of the once-great machine.

We’re at least glad the driver managed to escape more-or-less okay, but it sure does hurt to see this loss. Because so few Scuderias were made for the U.K., this crash is particularly painful and we’re just a group of outsiders looking in. From Ferrari owner to former Ferrari owner in just an hour; it’s not a feeling we’d wish on even our worst enemies.